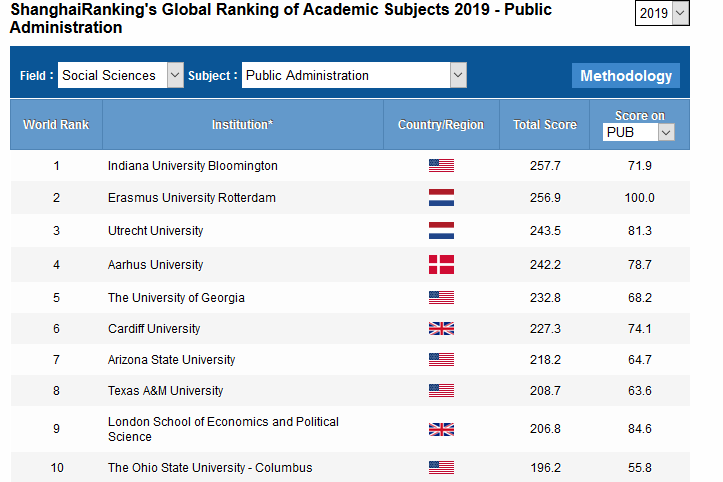 Thanks to the hard work of faculty and student researchers, the School of Public Affairs in the Watts College of Public Service and Community Solutions at Arizona State University was recently ranked #3 in the U.S. and #7 globally for research on public administration in the 2019 ShanghaiRanking's Global Ranking of Academic Subjects — ranking above institutions such as Harvard, Oxford and UC-Berkeley. The 2019 results demonstrate an increase from #5 in the U.S. and #15 globally in the 2018 rankings.

“Our prowess in research complements our programmatic excellence, as reflected by SPA’s six top ten rankings in specialized fields of public administration and public policy in the most recent U.S. News and World Report’s rankings, more than any university in the U.S. except Indiana University,” said School of Public Affairs Director Donald Siegel.

The Academic Ranking of World Universities (ARWU) was first published in June 2003 by the Center for World-Class Universities (CWCU), Graduate School of Education (formerly the Institute of Higher Education) of Shanghai Jiao Tong University, China, and updated on an annual basis. Since 2009, the Academic Ranking of World Universities (ARWU) has been published and copyrighted by ShanghaiRanking Consultancy. ShanghaiRanking Consultancy is a fully independent organization on higher education intelligence and not legally subordinated to any universities or government agencies.

ARWU uses six objective indicators to rank world universities, including the number of alumni and staff winning Nobel Prizes and Fields Medals, number of highly cited researchers selected by Clarivate Analytics, number of articles published in journals of Nature and Science, number of articles indexed in Science Citation Index - Expanded and Social Sciences Citation Index, and per capita performance of a university. More than 1,200 universities are ranked by ARWU every year and the best 500 are published.