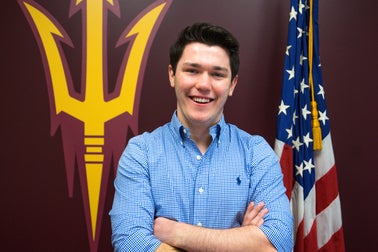 When Frank Smith got into trouble growing up, he was made to pay a peculiar penance.

“My stepdad would sit me in front of the TV and make me watch the news,” said Smith, now a junior at ASU.

Initially, serving this sentence bored the young Smith, which presumably was the intended effect. But then an interesting thing happened. He began to enjoy the news, and it became an important motivator in his life.

“That weird punishment is what led me to want to see the world,” he said, “and to influence it for the better.”

Smith, who is studying public service and public policy, has taken some giant steps in that direction.

He has been awarded the prestigious Truman Scholarship for 2015 for his work testifying before the Arizona House and Senate as part of efforts urging the Legislature and then-Gov. Jan Brewer to pass and sign a bill that creates a college tuition waiver for former foster children. Brewer signed the bill in 2013.

Smith knows their plight. He spent a turbulent childhood in the foster-care system, suffering abuse at the hands of those who were supposed to be helping him.

A native of Mesa, Smith said he was born to a mother addicted to crystal meth and that he never knew his real father. Things were bad at home. Eventually, he said, his mother fell into prostitution and his stepfather became physically abusive. He and his stepsister were placed in foster care when he was 16 years old.

Unfortunately, Smith said, that only made things worse.

Smith said his foster parents made him and his younger stepsister walk the neighborhood selling candy to give money to his foster parents. He said they were only allowed showers twice a week and had to wear dirty, ripped clothing.

“There was a time when they made me live in the garage, which you can imagine gets quite hot in Arizona,” Smith said.

After a particularly brutal episode of physical abuse, Smith said he had had enough. He called the police, and he and his stepsister were eventually removed from the home and placed with a relative, who was appalled when he learned the conditions the two had been living in.

Finally doors were opening for Smith, and he took advantage of them. He was now free to enjoy high school like a normal teenager.

“I went to my first dance. I went to football games and was able to apply for scholarships,” he said.

Applying for those scholarships paid off. Smith was awarded the Robert Armstrong Memorial Endowed Scholarship in Education to attend ASU, where he is concentrating his studies in urban and metropolitan studies. He is also an Obama Scholar and a Nina Mason Pulliam Legacy Scholar.

In his sophomore year, Smith was elected the youngest student body president at ASU, and later was re-elected for a second term. He volunteers every Sunday with the Salvation Army and, every semester, travels with a group of other ASU students to Mexico to build homes for families in need and distribute food.

“That’s really an eye-opening experience,” Smith said of his trips to Mexico. “To see the conditions they’re living in and to see how grateful they are is really rewarding.”

Smith is one of 58 Truman Scholars selected from 688 candidates nominated by 297 colleges and universities. Recipients are chosen based on their academic success and leadership accomplishments, as well as their likelihood of becoming public-service leaders.

Smith is thankful for the opportunities the scholarship affords him that otherwise wouldn’t be possible.

“I’m excited to reach out to former Truman Scholars, and it’s great not to have to worry about student-loan debt when I graduate so that I can get right to making an impact and leave the world a better place than I found it,” he said.

The scholarship also guarantees Smith an internship at the White House in the summer of 2016, where he hopes to work under the Domestic Policy Council and gain some real-world experience.

Afterward, he’s headed to grad school to obtain his master’s in public administration. He then hopes to become the city manager in Phoenix.

The 2015 Truman Scholars will assemble May 19 for a leadership development program at William Jewell College in Liberty, Missouri, and they will receive their awards in a special ceremony at the Harry S. Truman Library & Museum in Independence, Missouri, on May 24.