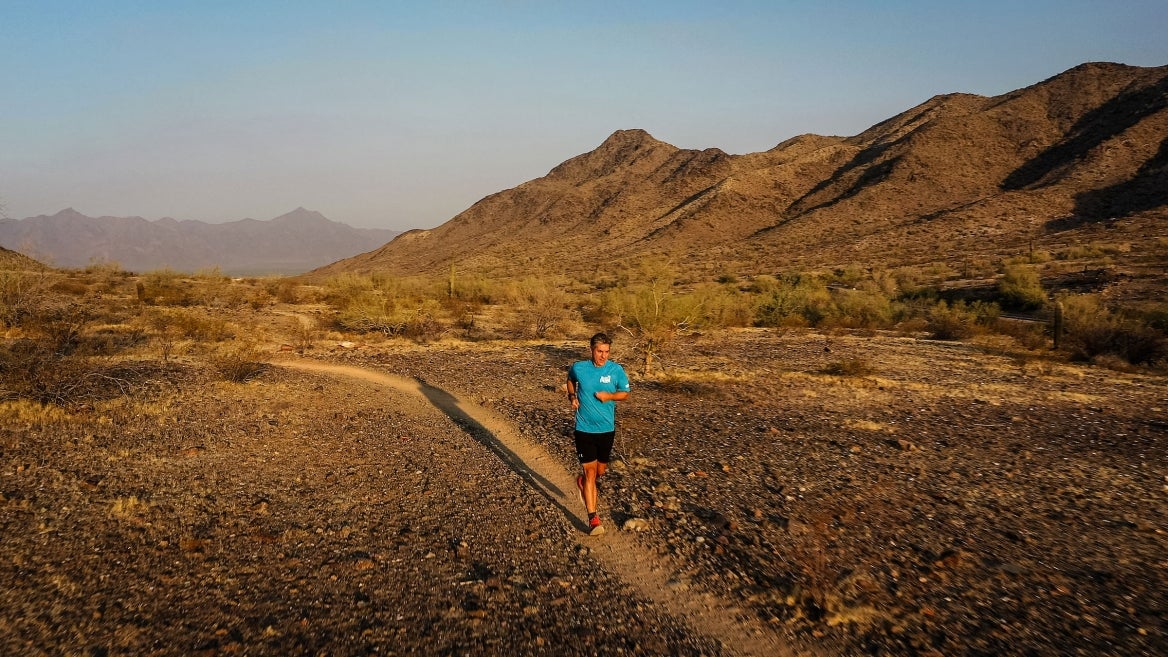 Running toward the 'pain cave'

Chris Herbst says that running 55 miles at a time can be so brutal that he enters a state he calls “the pain cave.”

Herbst, a faculty member at Arizona State University, is an ultramarathon runner, competing in races that are twice as long as a typical marathon.

But beyond the discomfort, he finds incredible beauty and peace of mind while pounding the trails for hours at a time.

Competing in ultramarathons is not unlike the discipline of academic research, said Herbst, who is a professor in the School of Public Affairs and a faculty affiliate in the School of Social Work in the Watts College of Public Service and Community Solutions. He researches early childhood education, child care and the impact of policies and markets on child, parental and family well-being.

“When you’re at the start line of a really long ultramarathon race, you have to come to grips with the possibility that even though you just dedicated the last six months of your life to training, there’s a decent chance that you’re not going to finish this race,” he said.

“There is a fairly thin margin between success and failure, finishing and not finishing these races. It can oftentimes come down to things outside of your control, which may make the act of ultra running seem like something you don’t want to do. But it’s exactly that thin line that keeps us coming back.”

Failure also is an important part of conducting academic research, he said.

“There’s never any assurance that when you start a difficult and complicated research project that it’s going to work out, or that you will learn anything useful from it or that it will be published,” he said.

“You line up at the starting line of your research project quite eager, having done all of your homework, having learned everything about the thing you’re going to evaluate knowing full well that you may not get this project across the finish line, and just like in ultra running, there are lots of things of things that can knock you off track.

“You have to be OK with that and willing to take some calculated, careful chances in pursuit of something you believe in.”

ASU News followed Herbst earlier this year as he trained for the Bryce Canyon 100 race in May, which was 50 miles in and around the national park in Utah. Here, he answers some questions about ultramarathoning.

Question: What is an ultramarathon?

Some ultramarathons happen on roads, but many more of them — and the ones I’m interested in — happen on trails, where you’re out in the wilderness in a national forest or park running in the wild.

Q: How did you get into ultramarathons?

A: I am kind of an accidental ultra runner.

The first time I went on a trail run was a casual social group run at night. I just showed up, thinking, “This sounds kind of neat.” I had all the wrong gear. I was in road shoes. My headlamp started to die. I thought, “This is crazy; why would anyone do this?”

I think it was the community because it wasn’t that I had some skill at this. The trail-running community has a distinct culture that is very different from the road-running community, and the primary tenet of trail running is niceness. Everyone supports everybody, and everyone gives advice.

Previously I ran one marathon, which was not a good experience. It turns out all I needed to go was get on some trails. I discovered this love for long-distance running. And we have an embarrassment of riches with trails around here. Q: How is ultra running on trails different from road marathons?

A: When you’re running the Rock 'n' Roll Marathon, there are DJs and people screaming at you out of bullhorns and bands and aid stations every mile.

For trail running, you may be at the start line with 50 or 100 other people, and it’s very quiet. The race director is giving instructions about the course, and you may or may not hear them.

And when you run these very long distances, you’re in the middle of a national forest and you’re very remote and spend sometimes hours alone. Sometimes the distance between aid stations is 10 or 12 or even 20 miles. It requires you to be OK with being alone out in the forest.

Road marathons are often a very flat, fast course. Trail running can be technical and rocky with very steep uphills and downhills. The running is more complicated and difficult.

A: From the time of my first trail run to my first ultra run was about two and half years. I built myself up: 5 miles, 6 miles, 10 miles. I worked up to 16-, 17-, 18-mile distances. And the idea of running 31 miles seemed more plausible and a little less crazy.

The transition from running 5 miles to going out to run 31 miles on a trail required as much an adaptation to my mind as it did to my body. By far the biggest barrier to imagining ourselves running an ultramarathon is our brains, not our bodies.

The longest distance I did was 91 kilometers, about 55 miles, called the Whiskey Basin Trial Run in November 2020. You run the Prescott Trail, which encircles the city of Prescott and goes through the Prescott National Forest.

It took me about 14 hours and was by far the most difficult thing I’ve ever done. There were some terrible moments.

It was very cold, very windy, and at one point it started to hail. I was physically and mentally devastated. What happens is that your body starts to reject food, which it desperately needs. No food, sweet or savory, real or synthetic, hot or cold, appealed to me.

It’s really in those moments when you learn about yourself. You know going in there will be those moments and they will very likely be at the end of the race, so you prepare yourself as best as possible.

And it was the most anticlimactic finish. Basically everyone had gone home. My wife just breathed a sigh of relief that it was done and she didn’t have to wait for me anymore and worry whether I was lost or in a ditch.

Q: How do you get through the worst moments?

A: You signed up for this. You decided to train for this race. It’s incumbent upon you to get yourself through the race.

One thing all ultra runners have to learn and no amount of training can help you with is how to manage those moments when you’re in the pain cave and you’re really suffering. How you compartmentalize that, push it aside and carry on in your race really determines whether you finish or whether you don’t.

A: The trail-running community has a distinct culture, and it’s one of support and camaraderie and mentorship.

I find that in trail and ultra races, you’re not competing with other runners as much as you are with the environment. And because of that mindset, you see your fellow runners as a way to learn about the sport and gain mentorship.

I would go to these group runs and seek information.

It’s impossible for the culture to not have an impact for how you do the sport, your place in it and what you want to get out of the sport. Hanging out with fellow runners ignited this curiosity and fire to see what I could do.

Q: How do you prepare for running remotely?

I spend hours studying maps, knowing where the major turns are. I carry maps and a GPS.

I’ve come dangerously close to stepping on snakes and been rattled at more times than I can remember. I carry a whistle around my neck. So far I’ve had no encounters with truly scary animals like mountain lions or bears.

Q: Have you cultivated a new appreciation for the outdoors since you’ve started ultra running?

A: I think of trail and ultra runners as Type A hippies. You have to be driven to get up every day to do your run, but you also have to love the outdoors and appreciate our public spaces and almost take on the mantra of environmental advocacy.

In Arizona we are extremely lucky to have lots of city parks and regional parks. We have several national forests within an hour’s drive of downtown Phoenix. There are many places in the country where folks don’t have that kind of access to wild spaces.

It is incumbent upon us trail runners, as folks who use these spaces a lot, to work and advocate to protect them. 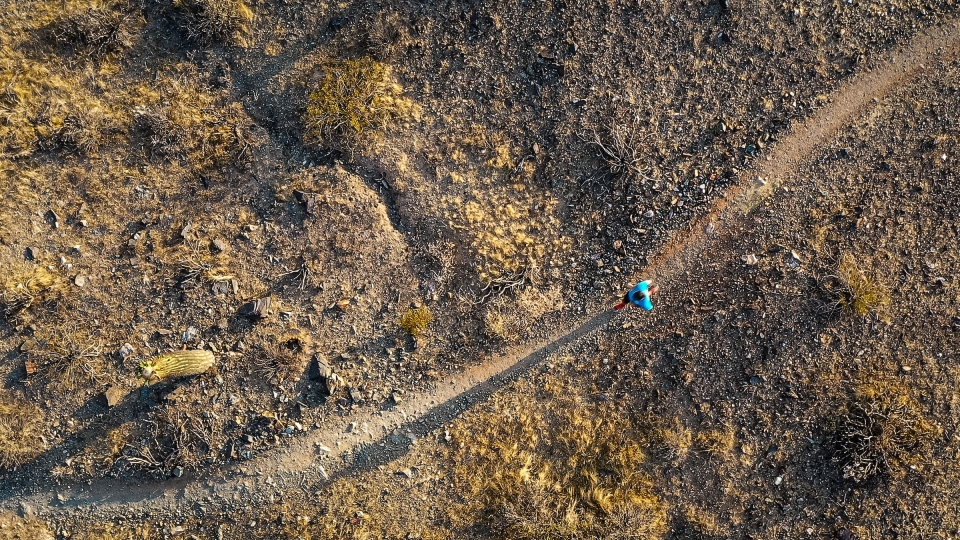 Q: Do you eat while running?

A: There’s a saying in ultra running that when you run a race, it’s really an opportunity to stuff your face with a couple of miles mixed in.

I carry synthetic gels and real-food gels, a mixture of rice, bananas, strawberries and molasses mixed into gel form. The other end of the continuum includes things like sandwiches, pretzels, chips, soup. The aid stations could be 10 to 15 miles apart, but you’re always glad because they serve the best food. In some races they have pizza, bagel sandwiches, bacon and sausage.

During a long race I’ll take in 100 calories every 30 minutes, sometimes more. You want to keep the deficit between the number of calories you need and the calories you’re burning to a minimum early on. Because when your stomach goes south later in the race and you don’t feel like taking in food, you will have spent the last eight hours building up a surplus, or a minimal calorie deficit.

There’s an art to taking in calories — to open them up, consume them and put them back in the hydration vest, all while running.

And part of it is training your stomach to eat a lot while it’s moving and not reject the calories.

Q: How did you do in the Bryce Canyon race in May?

A: If you finish something like this, it’s good enough. I was looking at the results afterward and a large percentage of the runners dropped out, so making it to the finish line was pretty good.

You’re basically running between 8,000 and 9,000 feet altitude. That wears on you and affects your appetite through the day.

Q: What parallels do you see between your approach to ultramarathon running and your work as a researcher?

A: In order to be successful as an academic researcher and as an ultramarathon runner, you have to enjoy the process and not be outcome-oriented. Academic research and training for an ultra are time-intensive and energy-intensive endeavors.

And if you’re only engaged in these things because of the potentially successful outcome, there are many chances for you to be disappointed in your work as a researcher and in your training as an ultra runner.

If you enjoy the process of waking up early, getting out on the trails and getting in 5 miles and then coming into the office and chipping away at a research problem, over the long term it will bring more pleasure and success.

The same goes for research. If you love chipping away at your problem a little at a time, making a little progress day in and day out — whether the project works out or whether the paper gets published in a journal of choice or accepted to a conference of choice may matter less because you enjoy the journey. And the final product will take care of itself.

Top image: Chris Herbst, a professor in the School of Public Affairs at ASU, trains at South Mountain Park for his ultramarathon races. Photo by Charlie Leight/ASU News