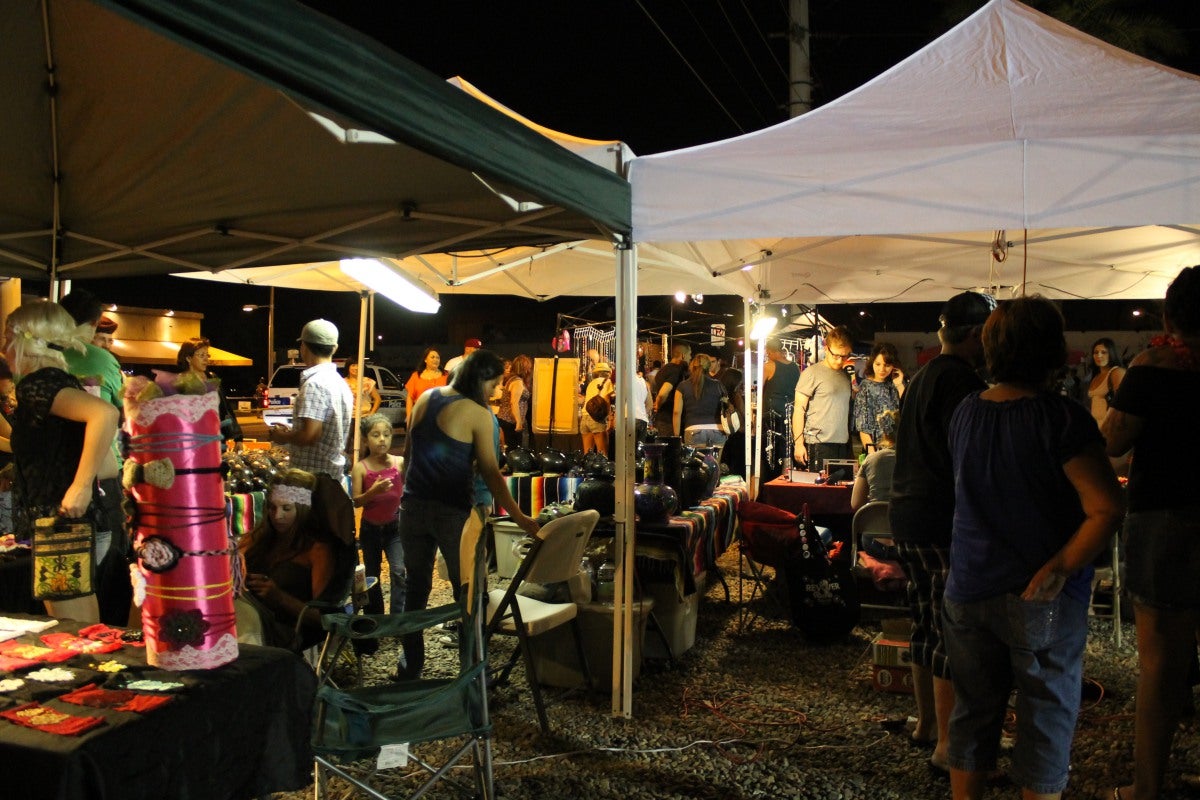 First Friday attracts thousands of people to Roosevelt Row in downtown Phoenix each month. Many people come for the art, atmosphere, music and food. ASU students Morgan Maxwell and Omar Smailbegovic came for a different reason. They wanted to see what the monthly event is like for people with disabilities. What they and their classmates discovered was presented to the Phoenix Mayor’s Commission on Disability Issues along with recommendations on how to make the area, and the event, more accessible for people with physical and invisible disabilities.

Eye-catching art and eclectic crowds are the big draw of First Friday, which as the name indicates, is held on the first Friday evening of every month along Roosevelt Street in downtown Phoenix. Lines of people stretch from Seventh Street on the east to Third Avenue on the west and along side streets populated by art galleries, boutique shops, restaurants and bars. Food trucks and vendors selling arts and crafts set up on a vacant lot. Musicians and street performers can be found throughout the more than half-mile stretch of Roosevelt Street.

Maxwell and Smailbegovic walked along Roosevelt and its side streets during two First Fridays this year. With classmates from an ASU urban governance class, they wanted to experience the event from a perspective neither had given much thought about--that of someone with a disability.

“This project helped all of us because it was getting into the community and putting yourself in someone else’s shoes,” says Maxwell, an urban and metropolitan studies major. “ Most all of us don’t have a disability, so it made us think from a different perspective and that is very important.

“Because if you are working in an urban atmosphere you will come across that. Not all of us are the same, obviously, so it’s good to see what other people’s needs are.”

What they found surprised them. Many of the older homes converted into shops and galleries lacked ramps that made them accessible for people in wheelchairs. Handicap street parking was non-existent. People spilled off sidewalks, often stepping into the street because of the volume of pedestrians. Crumbling concrete and uneven surfaces posed hazards for those walking on empty lots used by vendors. Poor lighting in some areas exacerbated the problem.

Maxwell, Smailbegovic and their classmates prepared a 12-page report for the Mayor’s Commission on Disability Issues. They presented their findings and recommendations at an April meeting of the commission.

Their recommendations for improving disability access in Roosevelt Row and during First Friday included: closing the street to traffic during the event, widening sidewalks where possible and replacing uneven surfaces that pose risks to pedestrians and installing new or temporary lighting where needed.

‘The significance of closing Roosevelt is to lessen crowding, broadening the street and improving access to vendors.” Maxwell says. “On Second Avenue and Roosevelt, the ground is uneven, inconsistent concrete so it’s even hard for someone without a physical or invisible disability to access in general. This will prevent accidents and less crowding.”

“I think they hit the issues spot on,” says Larry Wanger who serves on the Phoenix Mayor’s Commission on Disability Issues. “I was really pleased with what they came back with.”

Wanger, who is visually impaired, lives in the Roosevelt Row neighborhood. He recalls Roosevelt Street being closed during First Friday years ago and suggests the recommendations would benefit everyone attending the event.

“Improving access with wider sidewalks, smoother sidewalks or better lighting or closing Roosevelt so that it is safer for pedestrian traffic—these are all great things for folks who have disabilities--but it’s also great for the larger community,” says Wanger.

Making businesses more accessible to people with disabilities may not be that easy as the cost to retrofit old buildings could be too prohibitive for some shop owners.

“I know their intentions are well--that they want to provide a great service and business to the community, and they do,” Wanger says. “My hope is that a lot of folks are receptive to making changes that can increase accessibility.”

One proposal students suggested to the commission caught Wanger for its boldness. Since First Friday focuses on art, students found that some people with disabilities may not be able to fully enjoy all that is offered. They recommended that in addition to booking musical acts, organizers consider having dance and dramatic performances that could be enjoyed by people who are hearing impaired. Students also suggested that galleries and artists showcasing their work include tactile pieces that can be enjoyed by people who are visually impaired and have volunteer curators on hand to describe the art to those who can’t see it.

“I am intrigued by some of the suggestions for increasing access to art itself,” says Wanger. “I could see, for example, having volunteer folks going around describing paintings. But, given the traffic flow and the number of people coming in and out of a gallery, that may be difficult.”

The ASU students suggested Roosevelt Row and First Friday engage in a marketing campaign to engage the disability community. They also suggest that businesses and organizations affiliated with both increase their knowledge and awareness of disabilities.

Geoffrey Gonsher, who teaches the urban governance class, says the disability community is much larger than people may think as it includes people with invisible disabilities such as mental illness, ADD and anxiety issues.

“Anxiety issues would be concern because there are thousands of people at First Friday, so there should be a sensitivity to those kind of issues,” says Gonsher.

A professor of practice in the ASU School of Public Affairs, Gonsher is proud of his student’s work.

“I think the biggest thing is the students took hold of this project and took the initiative to do the work with minimal prodding,” Gonsher says. “They came up with the same kind of options--that if we had sent out some city engineers--we might have seen some of those options emerge from the discussion.”

Those options were forwarded to the mayor’s office following the presentation to the Phoenix Mayor’s Commission on Disability Issues.

“It was exciting to have produced something tangible,” says student Omar Smailbegovic who majors in public service and public policy. “We appreciated the response from the commission and hope the report can improve conditions on Roosevelt Row.”

Smailbegovic also appreciates having the opportunity to work on real world issues outside of the classroom.

“I think it’s really cool that ASU is committed to having an impact on the community and to bring together students and other people affiliated with ASU,” Smailbegovic says. “I’m proud to go to a university that does that. I grew up here, so I’m proud that this is happening here in my community.”

The experience doing the research, analysis and presentation will be beneficial to Smailbegovic and his classmates like Morgan Maxwell.

“What we are doing, essentially, is real work,” notes Maxwell. “We’re doing something for the commission and the mayor that is very important. It gives us insight into the kind of work we can be doing later on.”