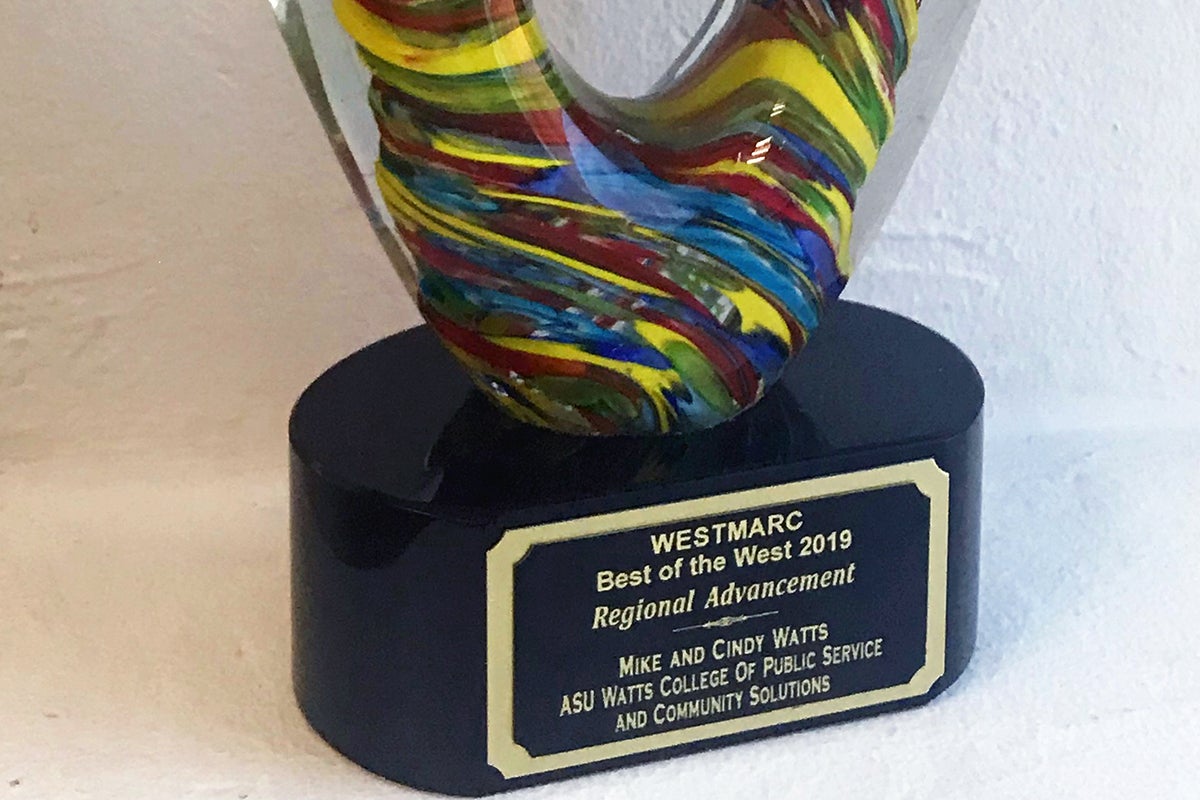 Mike and Cindy Watts, for whom the Watts College of Public Service and Community Solutions is named, received the Regional Advancement Award from WESTMARC on Nov. 7 during its annual Best of the West Awards show and dinner.

The Wattses are co-founders of Sunstate Equipment, a highly successful equipment and rental company that began in Arizona in 1977 and has expanded to 10 other states. Both grew up in the west Phoenix neighborhood of Maryvale when it was a newly developed community. Concerned by the urban decline Maryvale began experiencing in the 1980s and 1990s, the couple made leadership gifts to the Maryvale YMCA and endowed the Center for Violence Prevention and Community Safety, an initiative of the Watts College.

In 2018, the couple made a $30 million donation to ASU’s then-College of Public Service and Community Solutions, prompting the renaming and spurring expansion of the college’s work in community development, public policy, criminal justice and child well-being, including the funding of five endowed professorships. The gift also is contributing to a revitalization effort in Maryvale, with ASU collaborating directly with local leaders to bolster their efforts and increase community engagement.

Watts College Dean Jonathan Koppell spoke about the couple’s dedication to their community and region in a video introduction shown at the awards dinner.

“I can’t think of a couple that is more devoted to the West Valley than Mike and Cindy,” said Koppell, who said he was delighted to be speaking on behalf of the college bearing the couple’s name.

“It’s important to understand, however, that the gift to ASU, while being focused on our students and on great research, was primarily because they cared passionately about advancing the communities of the West Valley and saw the investment in the Watts College as being a vehicle for making a difference in people’s lives.”

Founded in 1990, WESTMARC — which stands for Western Maricopa Coalition — consists of 15 West Valley communities, including Phoenix, in partnership with area businesses and educational institutions including ASU. Its mission, according to its website, is “to address important issues facing the West Valley’s economic prosperity.”