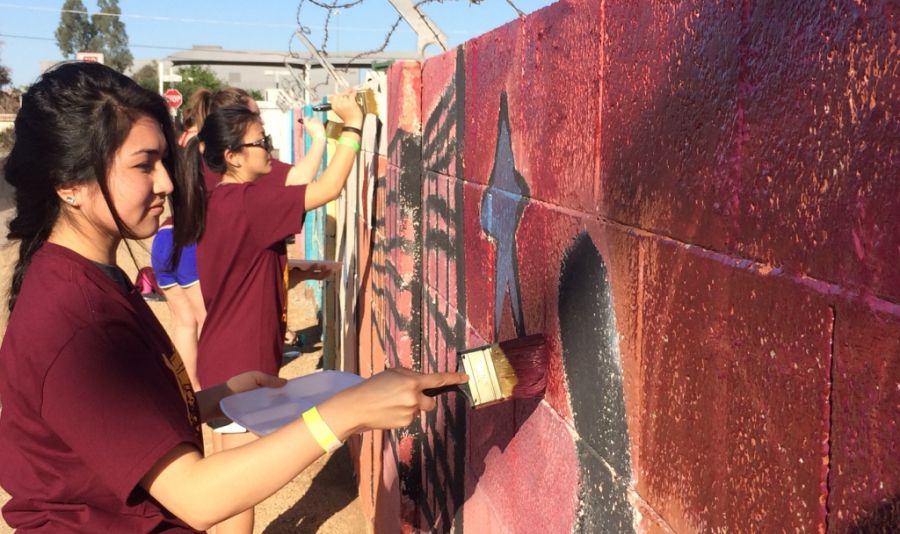 More than 150 ASU students, faculty and staff cleaned alleys and repainted murals in the Westwood community of central Phoenix Saturday, March 19.  The day of service effort is one of many ways the ASU College of Public Service and Community Solutions gives back to the community.

“It’s wonderful that ASU has stepped in and brings people in to help us to get it back to where it is,” says Cynthia Noel, a resident since 1998.  “So that we can make it an upkeep instead of a full-on clean up. And people are learning to care about their property again, which is really important. Because we have to care about our neighbors, care about our properties, to bring our community back.”

Noel helped clean alleys off 22nd Avenue north of Campbell that were full of overgrown weeds and bermuda grass.  She worked alongside students from the College of Public Service and Community Solutions and professors from the School of Criminology and Criminal Justice. They loaded debris, including chunks of concrete, wood, and other refuse onto wheel barrows and pushed them to dumpsters brought in by the city of Phoenix.

“Clean neighborhoods have the potential to inspire the people who live here to keep them clean," notes criminology professor Michael Scott. "Well-maintained neighborhoods inspire people to continue to take care of the property, which potentially discourages other people from trashing the neighborhood and using it for unlawful purposes.”

Other volunteers are busy painting well covers and a special wall a few blocks away. The 400-foot-long wall features murals painted by neighborhood kids. It's alongside the backside of a vacant auto dealership. One mural features kids running. Another reflects a volleyball game. There are others with the state flag and local sports teams names or logos.

One of those painting the wall is freshman Nicole Tai. She is part of the college's Next Generation Service Corps, a university effort to generate a new kind of leader who can work seamlessly in the public, private, nonprofit and military sectors.

“I think its really important for all of us to help as a community and it really shows of sense of giving back in service that we want to embody," says Tai.

The College partnered with the city and Dunn Edwards Paint, which supplied dozens of gallons of bright colored paint to freshen up the faded murals. Colt Gilbert works at Dunn Edwards a few miles east on Camelback Road. He brought his kids to help paint the wall.

“Not only does it make the neighborhood nice, it brings people closer to each other," says Gilbert. "It’s just one way to give back.”

The Westwood Community is located between Interstate 17 and 19th Avenue and stretches from Indian School Road north to Camelback Road. The neighborhood is a mixture of homes build in the late 1940s and 1950s on the east side and slew of hodgepodge apartment complexes on the west.

The neighborhood had the distinction of having the highest concentration of rental units of any square mile in the city in the 1990s. Crime was rampant. Then, neighborhood leaders had enough.

Westwood had no city park, no playground. So, neighborhood leaders got the city to block off a street on a weeknight and on Saturdays to give kids a safe place to play. They brought in portable basketball goals and other sports equipment. They provided games and music. Cops and firefighters volunteered their time. At first, neighbors brought food for the kids to eat, but local restaurants and a supermarket began providing healthy meals and snacks for kids who came from homes where food wasn't always plentiful.

They called it Kid's Street. A few years later, children helped paint the murals that are being touched up by ASU students and other volunteers.

Dale Larsen teaches in the School of Community Resources and Development and serves as director of community relations for the College of Public Service and Community Solutions. He was an assistant director of the City of Phoenix Parks Department at the time Kids Street was created. He credits a fiery retiree who was determined to improve her neighborhood and give its children a better place to live. Her name was Donna Neill.

"This notion of a 'Kids Street,’ a street that would be closed off on the weekends, so that kids would have a safe place to play was Donna’s idea 25 years ago,” says Larsen. "And it’s just a real honor to be back out here with ASU, with our college, with our respective schools and students so they see community action in is respective form.”

Larsen says Westwood reflects the kind of synergy that is possible when the private and public sector are determined to improve a community. Today, Westwood has a youth community center with a playground, lots of grass and a basketball court. It was named after Phoenix Police officer Marc Atkinson who killed in the line of duty not far from the Westwood community. Police and the city's Neighborhood Services Department played a major role in helping the community shut down drug houses and decrease the criminal element.

While crime is down from the peak levels of the 1990s, it has never gone away.  The neighborhood is still in need of help.

"The needs here are just as strong, just as important today as when we began this project 20 years ago,” says Larsen.

The college's dean, Jonathan Koppell, wants to explore a more formal relationship with the neighborhood, one in which professors and students can help Westwood residents better deal with the issues they face. Koppell believes the day of service was an excellent first step.

"It could not have been done without the volunteers who generously gave up a Saturday to help out neighbors," say Koppell.  "The work performed for the Westward neighborhood was greatly appreciated, a shining example for others to follow."