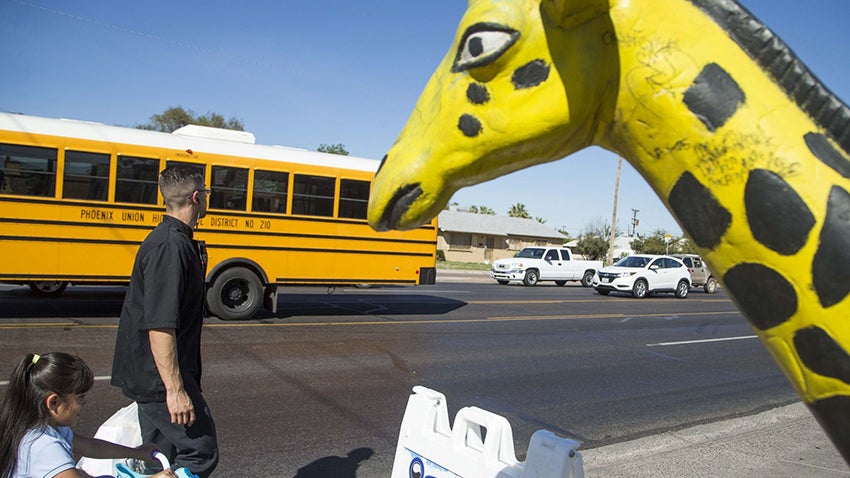 Arizona State University's public-service college bears a new name after the university received one of its largest-ever donations, part of which will strive to improve the future for kids and families in Maryvale. The Watts College of Public Service and Community Solutions is named for the founders of Sunstate Equipment, Mike and Cindy Watts.(Photo: Nick Oza/The Republic)

Arizona State University's public-service college bears a new name after the university received one of its largest-ever donations, part of which will strive to improve the future for kids and families in Maryvale.

The Watts College of Public Service and Community Solutions is named for the founders of Sunstate Equipment, Mike and Cindy Watts.

The Wattses will donate $30 million to ASU to help students succeed through scholarships and mentoring, pay for professorships and launch a community initiative in Maryvale, where the Wattses grew up.

ASU announced the gift at the Community Solutions Festival in downtown Phoenix on Monday.

ASU President Michael Crow called the gift "revolutionary" because it shows how higher education can help underserved communities and students.

Mike and Cindy Watts "are lockstep with our mission of embracing the communities we serve and taking full responsibility for their long-term success," Crow said in a press release.

Details of the donation

The money will provide scholarships for first-generation college students to help them with tuition or for experiences such as studying abroad or internships, with the hope of increasing retention and graduation rates.

The public-service college has ASU’s highest percentage of first-generation students.

Funding also will go toward programs such as the Spirit of Service Scholars, a leadership-training program that will do community outreach at Maryvale schools.

Other initiatives that will benefit include: the Community Solutions Co-op that focuses on service learning; the Student Social Entrepreneurship Fund, which offers seed money to student entrepreneurs; and the Undergraduate Research Program, which helps students work with professors on research related to societal challenges.

"It was like Mayberry," Cindy Watts says of Maryvale, where she and her husband, Mike, grew up. "It was just a wonderful blue-collar, working-class neighborhood, very safe." Mike Watts says with strong community support, the neighborhood, which has struggled with crime and drugs, could see a turnaround. (Photo: Nick Oza/The Republic)

In Maryvale, the money will go toward a program dubbed the “Maryvale Revitalization Project and One Square Mile Initiative,” where the college and leaders in Maryvale will work together to figure out what the community needs.

The program will help bolster local entrepreneurs and other activities the community needs in a yet-to-be designated square-mile area.

“It’s embracing the idea that the university can be a catalyst and a powerful engine for change in the community,” said Jonathan Koppell, the public-service college’s dean.

The community will be involved in the initiative through town-hall meetings and surveys to see what members believe is most needed.

It's not yet known what programs in Maryvale the donation will spur. The school doesn't want to parachute into the neighborhood and tell them what they need, Koppell said.

Instead, the college and community will work together to analyze needs and figure out how to address them, he said.

Why focus on Maryvale?

The west Phoenix village of Maryvale has more than 208,000 residents and comprises 38 square miles.

Started in the 1950s, it was the brainchild of developer John F. Long, and the Valley's first master-planned community.

But over the years, Maryvale has seen crime spike and poverty levels rise. About 34 percent of Maryvale's residents live below the poverty line, and 39 percent don't have a high-school diploma. The area has shifted from majority-white to majority-minority, with about three-fourths of residents Hispanic.

The Wattses see potential in Maryvale, where they both grew up. Both also graduated from Maryvale High School.

"It was like Mayberry," Cindy Watts said. "It was just a wonderful blue-collar, working-class neighborhood, very safe."

There was little crime and drug use, Mike Watts said.

"Will it ever get back 100 percent to that? I think in many ways it could," Mike Watts said.

The Wattses hope the university's involvement will help community groups work together to advance Maryvale and identify needs.

Mike Watts said he hopes to see programs that focus on youth entrepreneurs, reducing recidivism and increasing first-generation graduation rates. Cindy Watts said there should be a higher percentage of high-school graduates and a clearer path to higher education for Maryvale students.

Dwight Amery of the Maryvale Revitalization Corporation, nicknamed "Mr. Maryvale," talks about his favorite things about the neighborhood.

Often, graduates donate to their alma maters as a token of appreciation for their successes. But Mike and Cindy Watts, who married more than 50 years ago, aren't ASU graduates. Mike took some night classes there, but didn't graduate.

"Dr. Crow and I have kind of chuckled over my records there," Mike said.

For the Wattses, donating isn't about school colors or fight songs, said Koppell, the ASU dean.

"It's about this being the vehicle to see the Phoenix that they envision come to fruition," he said.

After graduating from high school, the Wattses went into the workforce. They eventually founded Sunstate Equipment, a construction-equipment rental company. Mike was motivated by being his own boss, and he wanted a business focused on people enjoying their work and achieving their potential.

The business eventually expanded to 10 other states. They sold the business last year to Sumitomo Corp.

"The sale of the business put us in a position where we can give back further," Mike Watts said.

For two humble kids from Maryvale, having a school bearing their names is "a little surreal," Cindy said.

But this isn't the first building named after them, nor their first time donating to ASU or Maryvale. Maryvale's YMCA is named after the Watts family. They have given in the past for ASU programs focused on violence prevention and student-athlete academic excellence.

While the Wattses say they didn't envision a future like this — with their names on buildings — the idea of not using their success to help others wasn't an option.

"I think it’s a responsibility," Cindy said. "To those who are given much, much is expected. And we’re all part of this human family, and we all need to help each other."

Mike Watts said he hopes to see programs created with the help of his and wife Cindy's $30 million donation to ASU that focus on youth entrepreneurs, reducing recidivism and increasing first-generation graduation rates. Cindy Watts said there should be a higher percentage of high-school graduates and a clearer path to higher education for Maryvale students. (Photo: Nick Oza/The Republic)

How will students be affected?

Students at the college will be able to access funds for more programs and work on projects in Maryvale launched by the initiative.

The donation shows students in the public-service college that their work is meaningful, and their potential for change is significant, Mike Watts said.

They hope students feel inspired that someone cares enough to help them get through college.

And in turn, the Watts name could become synonymous with public service, like other major donors have become known for their philanthropy.

A MATTER OF TRUST:  Immigrant community in Maryvale, police work together

"That’s a feel-good. That’s something we can feel very good about," Mike Watts said.

The major donation should make public-service students feel confident in their career paths and excited for their futures, Koppell, of ASU, said.

How the donation compares

The Wattses' donation is one of ASU's largest naming gifts in the university's history. Here are the other large donations that renamed colleges: