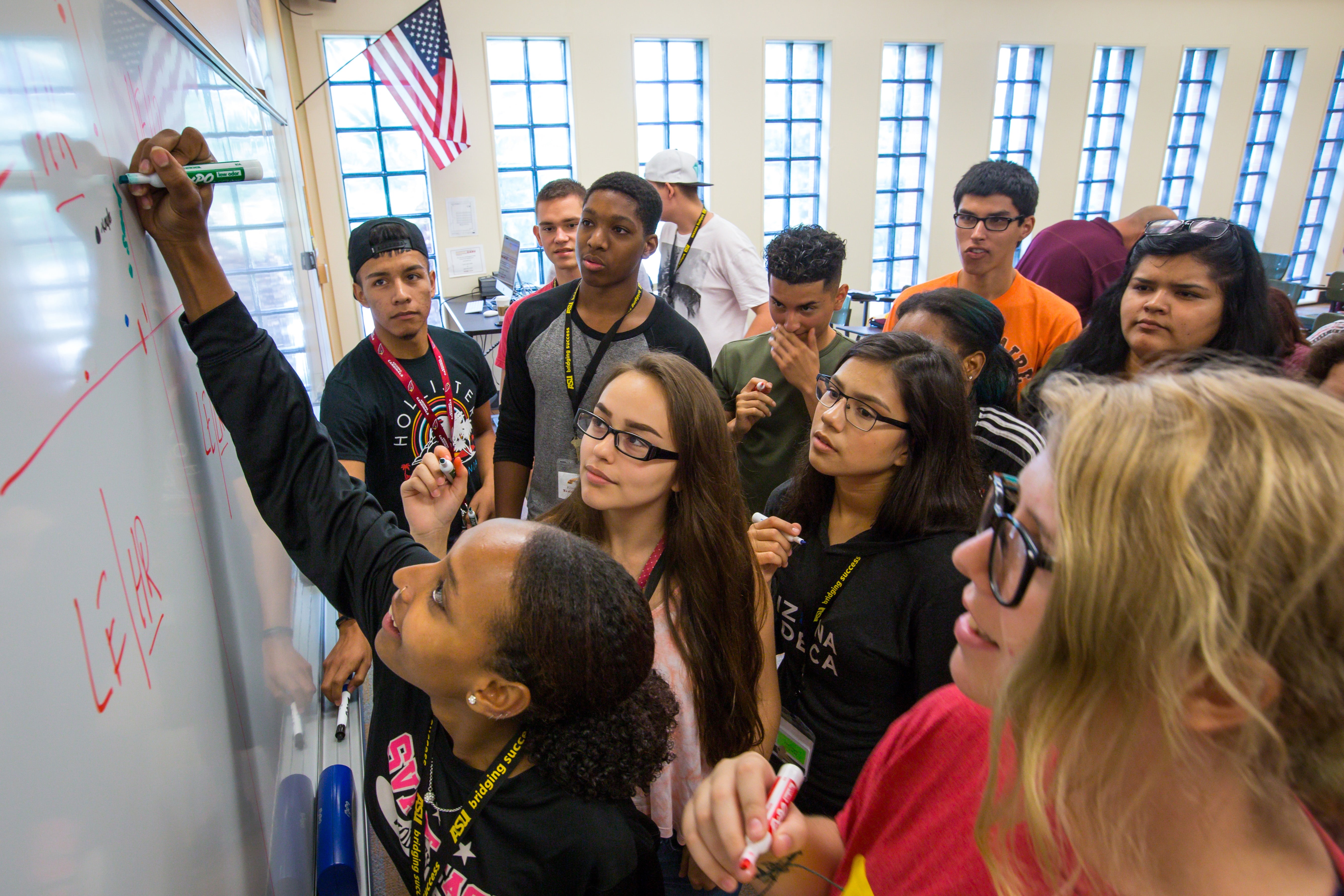 Nikki Burgess lived with a foster family in high school, and during her freshman year at Arizona State University she hit a rough patch.

“I was going through some personal struggles, and I thought, ‘Nobody can relate to me on this,’ ” she said. “I didn’t think I could talk about it with anyone.”

Now a senior social justice major, Burgess is a peer mentor with Bridging Success at ASU, which supports students who have been in foster care, many of whom might not have family support. The program helps them navigate the complex university system, connecting them to tutoring, jobs, transportation, health care and other kinds of help.

It also creates a community with a common bond.

“Both socially and academically, it would have been nice to find a group of students to make friends with who were in the same situation as me,” Burgess said of Bridging Success, which is now in its second year.

“It’s cool for these students to see that they’re not alone,” she said. “Other people are going through this as well.”

Bridging Success was created in response to the state’s tuition-waiver program, which passed three years ago, allowing students who have been in foster care to get free tuition at the state’s universities and community colleges. To receive the benefit, students must indicate on their financial-aid form that they’ve been in the foster system.

Those heading to ASU are then contacted by Justine Cheung, program coordinator for Bridging Success.

“There are tons of support systems at ASU, but we’re unique because we understand the trauma histories in the majority of these students,” said Cheung, who is a foster mother to an 18-year-old.

“A lot of people ask me, ‘What’s the typical story?’ But there is no typical story with these young people,” she said.

This week, Bridging Success ran its Early Start session — a six-day program for students who are new to ASU, either first-time freshmen or transfer students. They lived on campus, went on tours and attended sessions that prepared them for college life, such as “Navigating Your First Year,” “Dissecting Your Syllabus” and “What to Expect in the Large Lecture.” They also received computers that were donated by Insight, based in Tempe.

Cheung said the goal is for all 37 students in this year’s Early Start cohort to graduate on time, and to increase the participation to 50 students next year.

Last summer, 17 students enrolled in the first Early Start, and Cheung said that of those, 14 continue to pursue their education at ASU or another institution.

Cheung is pleased with that result because it’s not unusual for students from foster care to take five or six years to earn a degree.

“With the limited external supports of family and financial security, they often have to ‘stop out’ to work,” she said.

“They also can face emotional and mental health challenges that require a break in their education,” she said.

During the school year, Bridging Success reached about 275 students who self-identified as being from the foster-care system. They received help in person, on the phone or through email, Cheung said. About a third are pursuing online degrees.

The students who are in Early Start are especially bonded with each other.

“They have that conversation. This group has been very open about their histories, and that common denominator breaks down barriers,” Cheung said.

On Tuesday, the group met with Alonzo Jones, associate athletic director for inclusion and championship life, who talked about balancing studying and socializing.

“You come here not just to get a piece of paper, but to develop a depth of knowledge that you can forever access that will help you solve complex problems in the future,” Jones said.

Jones told the students that they are biologically hardwired to prefer socializing.

“ ‘Social’ is an extension of your biological self,” Jones said. “ ‘Student’ is the realm of your intellectual self.

“ ‘Social’ wants to have fun all the time,” he said. “But one day you will be older, and ‘student’ is preparing for the future you.”

“It’s going to help me a lot,” said Mussein, who is majoring in business and wants to own a shoe-design company one day.

She expects Bridging Success to be a good support system.

“None of my friends are going here and I don’t have any family, so this is basically my family.”