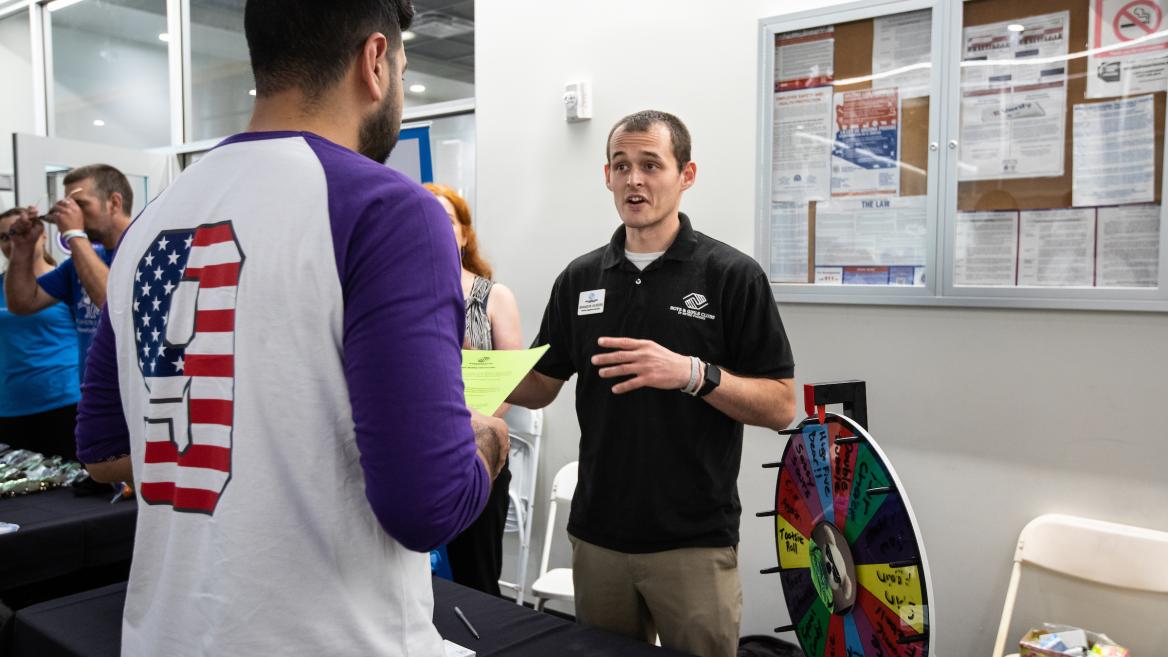 Brandon Vickers served his country for five years while he was a welder in the Navy. When he resumed civilian life in 2016, he knew he wanted to continue serving his community, but he didn’t know how.

And then he found Public Allies Arizona, an intense, full-time apprenticeship program that pairs young people with nonprofit organizations. And he knew it would be perfect.

“It turned out to be the greatest thing that ever happened to me,” said Vickers, 25, who has spent the past 10 months working at the Boys and Girls Club of Metro Phoenix as part of the program.

“The Navy was awesome and gave me skills, but this has given meaning to the work I’m doing.”

Vickers is among 30 young people in Public Allies Arizona, a program of the Lodestar Center for Philanthropy and Nonprofit Innovation, in the School of Community Resources and Development at Arizona State University.

This is the 13th cohort of Public Allies Arizona, which pays the allies a stipend of about $14,000 to work at nonprofit organizations in the Valley. After completing the program, which is part of the federal AmeriCorps program, the participants receive a $5,800 award to pay for tuition or professional development or to apply toward student-loan debt. More than 400 young adults have participated since Public Allies Arizona was launched in 2006.

The nonprofit groups get motivated staffers and the participants not only learn valuable job skills, but also undergo profound personal growth. Several of the current allies described their experiences at “Presentations of Impact” Wednesday night at ASU’s Downtown Phoenix campus.

“My childhood wasn’t the easiest. We moved a lot and I attended a lot of different schools,” Vickers told the crowd.

“The Navy gave me an idea of what it meant to serve a cause greater than myself,” he said.

He was ecstatic when he found Public Allies Arizona listed on a job-search engine, although — like all the allies — he was nervous and unsure if he could do the work.

“But that feeling quickly went away,” he said, as he described how he helped the Boys and Girls Club renew its service enterprise certification, reached out to alumni and helped to recruit millennials and people with disabilities to be volunteers.

Besides working with nonprofits, the allies work on projects together, get personal coaching and attend leadership training.

“The biggest thing it’s helped me do is to learn the value of networking and forming relationships — and forcing me to do it,” said Vickers, who transferred from Glendale Community College and now is majoring in nonprofit management at ASU.

“I was always a shy person. Now I’m a better communicator, even just talking with family and friends,” he said.

The allies come from a wide variety of backgrounds. Some are college students, some have degrees and a few joined right out of high school.

Channtal Polanco spent her Public Allies term with Opportunities for Youth, an ASU initiative to help young people who are neither working nor in school. At the presentation Wednesday night, she described her own experience. She was attending college in California when she unexpectedly became pregnant. She left college and returned to Phoenix, where she had her daughter.

“I was not working or enrolled in college. I became an opportunity youth,” she said.

“I knew I needed a change in my life not only for myself but also my daughter. But I was faced with relentless obstacles and barriers.”

Finally she was able to enroll her daughter in a full-time preschool program run by Chicanas Por La Causa, allowing her to enroll in school and get a job.

“But I still yearned for a new challenge,” she said. “And that led me here.”

At Opportunities for Youth, she recruited teens for a manufacturing job-readiness program.

“I thought, ‘How can I make this program appealing? Why should they listen to me?’” she said. “I learned an important lesson — to meet the youths where they’re at.”

The allies described their victories. Polanco was able to get a very motivated young man enrolled into the job program within 24 hours. Vickers learned the stories of people who attended the Boys and Girls Club in the 1940s as part of his work to reenergize the alumni group. Yaylah Trujillo, a student at Estrella Mountain Community College, recruited 10 people to become LGBTQ-friendly foster families through her work with Devereux Advanced Behavioral Health.

And Anne Mbugua is launching a new youth-employment program, Arizona Youth Forces, through her work at the Boys and Girls Club of Metro Phoenix.

“I’m helping teens ages 16 to 18 get paid internships, which introduces them to the work force,” she said. The teens attend workshops to learn soft skills, like how to communicate in the workplace, before they’re placed.

Mbugua, who is from Kenya, came to Public Allies Arizona after several years of living abroad in Europe and Canada.

“This program has really helped me enhance my skills. I’m very passionate about working with young people and I was excited that I would get to pilot a program, which I’ve never done before,” she said. “I thrive in the chaos of it. I just run with it.”

Public Allies is the just the latest service stint that Mbugua has taken on.

“Every country I’ve gone to, I’ve always volunteered,” she said. She worked with homeless people in train stations in Poland, at an international youth hostel in London and with a mental-health youth program in Canada.

“I love the joy of traveling and living in a different culture whether it’s six months or five years,” she said. “I’ve gone through five passports.”

Mbugua will end her term with Public Allies Arizona in November, and is working on keeping the new internship program sustainable and measuring its success.

“One way to measure success is who finished the internship? Were they retained somewhere? Did they attend all 10 workshops?”

Mbugua plans to move to New York and pursue a career in cross-cultural coaching.

Public Allies Arizona has been invaluable in charting her course.

“You’ll figure out what you want to do and what you absolutely don’t want to do,” she said.

“You learn teamwork, management, and you learn to be a good leader.”

Top photo: ASU student Brandon Vickers works a volunteer fair at Grand Canyon University. A Navy veteran, Vickers has been working at the Boys and Girls Clubs of Metropolitan Phoenix as part of his participation in Public Allies Arizona. Photo by Charlie Leight/ASU Now