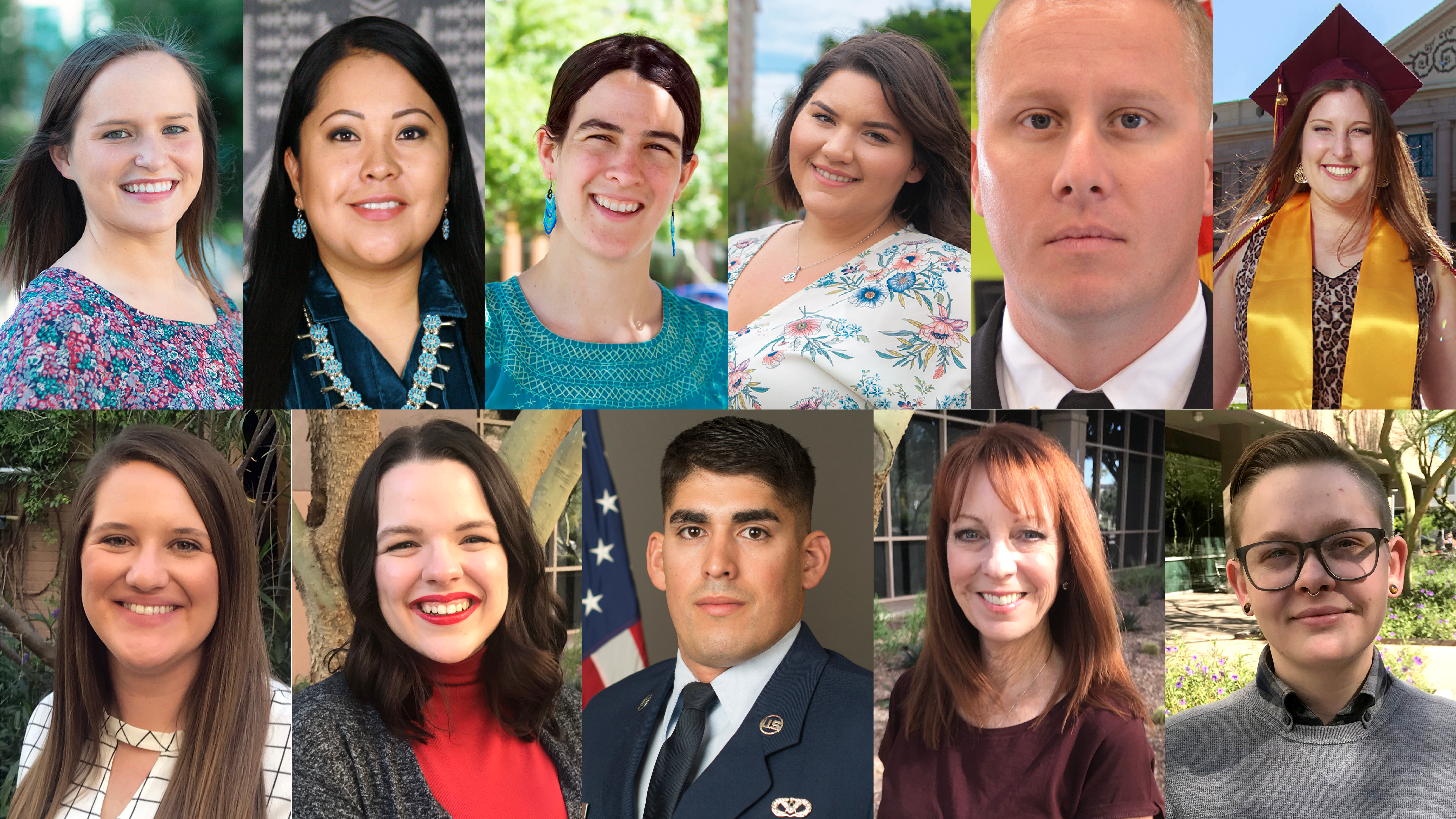 Hundreds of students crossed the threshold into their professional futures as graduates of the Watts College of Public Service and Community Solutions in 2019. Each degree represents life-changing achievements for the person who earns it. The following stories of 11 students, honored as the spring and fall 2019 Outstanding Graduates of each of the Watts College’s four schools and its interdisciplinary program, tell of many milestones achieved by overcoming adversity and challenges. These accounts reveal far-reaching plans and express high hopes among our newest alumni.

Aly Perkins’ academic transcript bears the look of a young scholar in a hurry to get to the next level. Her success in advanced placement classes gave her a large head start in college. The School of Public Affairs graduate completed her bachelor’s degree in three years.

Senior Master Sgt. Joshua Loescher, who graduated with a master’s degree in public safety leadership and administration, is the outstanding interdisciplinary graduate. He takes to heart the universal truth that education is a great equalizer. He has seen it in action during his military career in places like Baghdad.

Having fun is a lifelong habit of Kelly Walsh. It’s important to her as a person aspiring to remain healthy and strong in her quest to help improve the lives of others. But now having fun for Walsh, outstanding graduate for the School of Community Resources and Development, is also part of a framework for rigorous thought and scientific practice.

Katharine Leigh Brown is the outstanding graduate for the School of Criminology and Criminal Justice. She wants her research on fairness and police-citizen interaction to unlock mysteries of how and why the criminal justice system does what it does and how to make that system better for everyone.

On the border, grad hopes to make a difference in immigration policy

Joanna Williams didn’t travel lightly on her purposeful journey to earning a master’s degree in public policy, and she’s leaving ASU’s School of Public Affairs with more than a diploma. The director of education and advocacy at the Kino Border Initiative (KBI) said she now has greater means to promote policies that respect the rights and dignity of migrants.

Ashley Funneman, the School of Public Affairs’ outstanding graduate, was a case manager and crisis intervention specialist working in a state-funded program to help seriously mentally ill adults and children when she realized she wanted to learn more about how such programs are run. That is, what it’s like to be the boss.

Several difficulties presented themselves to the School of Social Work’s outstanding graduate. The biggest: During her course of study, Wendi Malmgren had to deal with the deaths of two immediate family members.

For a firefighter to attain the rank of captain usually takes several years, often a decade or two, of dedicated service. At 24, Staff Sgt. Oliver Silva credits his graduate studies in the Watts College interdisciplinary programs as what set him apart from his colleagues.

Brittny Dwyer of the School of Criminology and Criminal Justice discovered she wanted to study criminal justice when as a teen she first read Phillip Zimardo’s “The Lucifer Effect,” about the psychology of what pushes seemingly normal people to do bad things.

A career in nonprofit work hadn’t initially occurred to the School of Community Resources and Development‘s Atlas Pillar, who originally was a double major in musical theater and journalism. But reflecting on his life and the many champions who helped him along the way, Pillar eventually decided to devote his life to serving others.