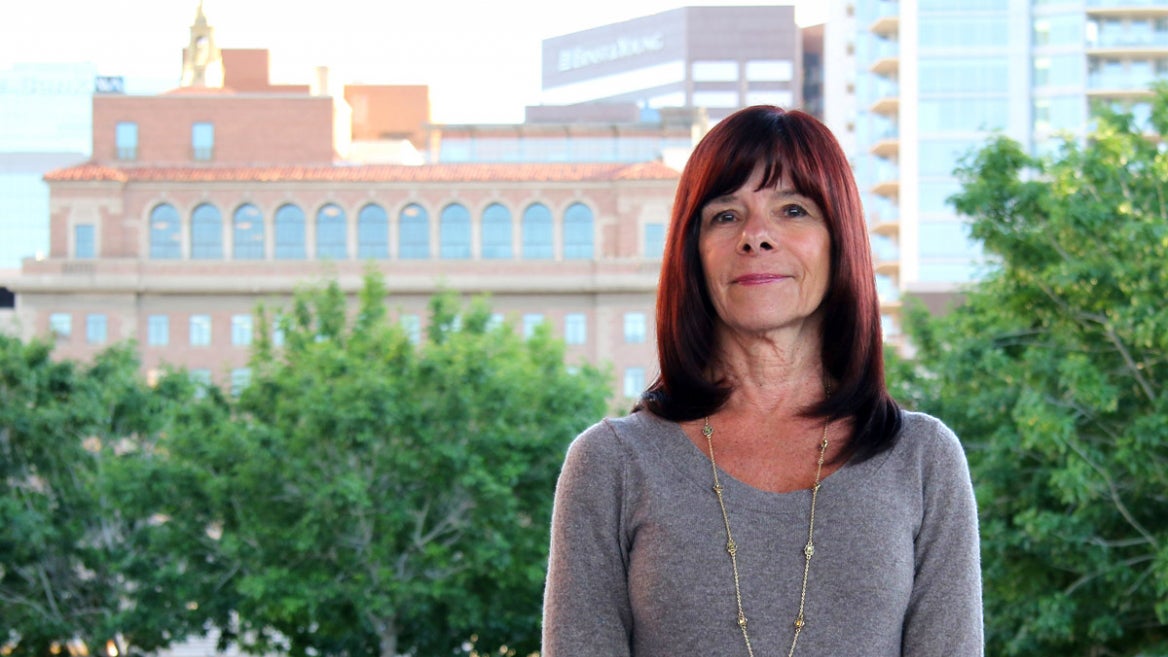 Her office bookcases were half empty, with dozens of volumes already in boxes on a table in her soon-to-be former office, as Cassia Spohn completed her time as director of the School of Criminology and Criminal Justice and reflected on the next phase of her career journey during the waning days of 2019.

Her exit from the directorship position coincided with her recent recognition as one of Arizona State University’s five newest Regents Professors — the university’s highest faculty award.

“Being named a Regents Professor is a recognition of contributions to research and scholarship,” Spohn said. “I’m humbled to be among those designated.”

Jonathan Koppell, dean of the Watts College of Public Service and Community Solutions, said the designation as Regents Professor represents “an honor richly deserved, as Cassia is among the most distinguished scholars in her field, with a record of impact both in the scholarly understanding of criminology and the practice of criminal justice,” he said. “We are enormously fortunate to have Cassia as a colleague and leader of our school.”

As the honor was announced, Spohn was already in the process of wrapping up five and a half years directing the school. Still, administrative duties haven’t solely been occupying her tenure as director. Since 2015, she has published three books and 30 scholarly articles.

Spohn started her academic career at the University of Nebraska-Lincoln working toward a bachelor’s degree in journalism and political science during the Watergate-scandal era; she dreamed of being an investigative reporter like the Washington Post’s Bob Woodward or Carl Bernstein.

She worked briefly for the Lincoln (Neb.) Journal-Star, but not in investigative journalism: “I wrote wedding and engagement announcements,” she said.

Shortly afterward, she was lured by an assistantship to pursue her doctoral degree in political science, the subject she was expecting to teach. But one of the first articles she published after graduate school dealt with the effects of race on sentencing.

“From there I was hooked on criminology and criminal justice and on looking at improving the fairness and equity of the system,” she said.

Spohn said that in 2020 she will look forward to trading the challenges of running one of the nation’s top criminal justice schools for more time to devote to the scholarship and research that earned her the Regents title.

“I’ve enjoyed the last five years, mostly,” Spohn said with a smile. “But it’s come with challenges and I’m happy to pass the baton to Jon Gould in January.” Gould, who left American University in Washington, D.C., began as the School of Criminology and Criminal Justice director on Jan. 1.

Scott Decker, Spohn’s longtime colleague, fellow Foundation Professor and now an emeritus professor, has known Spohn since they both were young in their careers, “trying to make our way forward in the discipline.”

He is one of many colleagues who cite Spohn’s status as a major force in criminology and criminal justice professional circles.

“Every criminologist knows Cassia Spohn and her work, because she is such a dominant figure in the field. Her work is central to the field, it is known not only by specialists in her areas of work, but by all working criminologists,” Decker said, calling her a “consummate academic leader, demonstrating by example as well as mentoring and educating students, from first-semester freshmen to advanced doctoral students.”

Decker also said Spohn’s work is “foundational” to the understanding of race and gender in sentencing and also has had a significant impact on research, policy and criminal justice processes across the system.

“She is among of a handful of senior female scholars who blazed the trail for other women to gain acceptance in PhD programs, leadership roles and the highest level of recognition in the field,” he said.

Pauline Brennan, a professor in the School of Criminology and Justice Studies and PhD program director at the University of Massachusetts, Lowell co-authored a number of research papers with Spohn. Recently they co-edited the “Handbook on Sentencing Policies and Practices in the 21st Century” for the American Society of Criminology’s Division on Corrections and Sentencing.

“She is a wonderful mentor; I learned so much about the research process from her, and also the benefit of providing service for the discipline and the grace that comes with supporting others,” Brennan said. “I am privileged to have been able to work with her over time, and hope to do so for many years to come.”

Brennan said a scan of Spohn’s curriculum vitae would lead to the immediate conclusion that “Cassia is an academic giant.” But beyond Spohn’s scholarly activities and tremendous productivity, Brennan noted her skill as a guide to others.

“She has chaired over 20 dissertation committees, co-authors work with graduate students on a regular basis, makes it a point to mentor junior faculty and seems to always know exactly the right approach to just about everything. Again, I cannot overstate how much I admire Cassia,” Brennan said.

Spohn said as she returns to full-time research and teaching, she will primarily concentrate on disparities in sentencing due to race, gender and other legally irrelevant factors, the processing of sexual assault cases, and working with others at ASU on ways to help prevent those who have served their sentences from becoming repeat offenders.

Also, with the support of a grant from Arnold Ventures, she will work with Arizona’s Administrative Office of the Courts on a study examining the causes and consequences to defendants of failing to appear in court.

In this last area, she said she wants to find out what motivates or incentivizes defendants to appear and whether there are steps that courts can take to improve the appearance rate.

She also will continue to devote herself to her membership on a U.S. Department of Defense Advisory Board on Investigation, Prosecution and Defense of Sexual Assault in the Armed Forces, a board she has served on since 2017. Over the next few months, she will be contributing a chapter to a book on criminal justice reform, writing about racial and ethnic disparities in the imposition of life-without-parole sentences in the federal courts, and working on a paper examining sentencing in Arizona.

Spohn and the other Regents Professors will be formally vested at an ASU ceremony Wednesday.

Top photo: Cassia Spohn resumed full-time research and teaching Jan. 1 after five-plus years as director of ASU's School of Criminology and Criminal Justice. She was named a Regents Professor in November 2019.