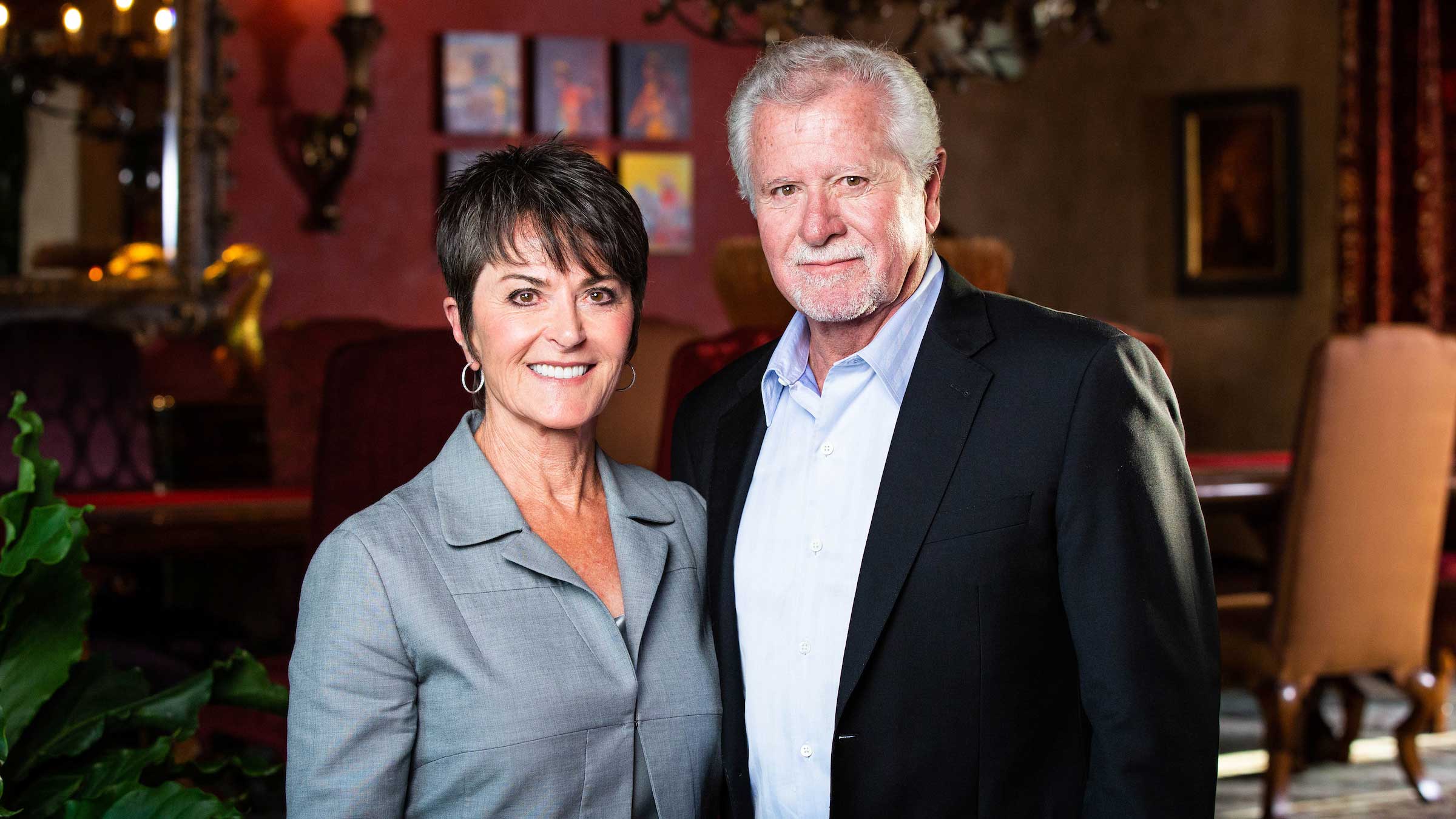 Editor's note: This story is being highlighted in ASU Now's year in review. Read more top stories from 2018 here.

Mike and Cindy Watts took over a tiny lawnmower-rental company in 1977 and worked day and night for 40 years to grow it into the thriving enterprise that Sunstate Equipment Co. is now. Though their business was about backhoes and forklifts, they knew that their company’s real assets were the people.

“We focused on the culture of the company, and it’s all about people,” said Mike Watts, who, as CEO of Sunstate, learned to invest in his employees. “We would provide opportunities and encourage their growth and development.”

Today, the Watts family is continuing to invest in people with a gift that will further Arizona State University’s mission to increase access to higher education and to partner with the community. And on Monday, ASU announced the historic renaming of its public service college to the Watts College of Public Service and Community Solutions.

In announcing the gift, ASU President Michael M.Crow said that while the university is dedicated to helping the community, the gift from the Watts is an example of how the citizens can step up to improve the university.

“How do you make a democracy more successful? How can you design a university that can be of the community and committed to the community’s success?” he said. “For all that we bring, we cannot do that by ourselves. The community and its leaders, its citizens, must also engage and help advance the institution.”

The $30 million investment is one of the largest gifts in ASU history and demonstrates a continuation of the Watts’ commitment to advancing the prosperity of Arizona by harnessing the power of the university and its broad array of programs to transform neighborhoods, cities and the state.

Crow said through their legacy of giving and partnering with ASU, the Watts are role models.

“They have stepped up in a way that through their investment, this college can expand its intellectual footprint and its impact in the community itself,” he said.

Mike Watts said on Monday that seeing the family name on the college is meaningful if it encourages other donors to support the university.

“It’s more meaningful if, as the students see the name up there, they know that we’re supporting them,” he said.

Jonathan Koppell, dean of the college, noted at the beginning of the ceremony that the Downtown Phoenix campus is built on lands that were long populated by indigenous people, whose innovative canals still exist today.

“They offer a lesson applicable to today’s gathering: Through their commitment to collective action, they took a hostile environment and built a place where we can live,” he said. “That's what public service and community solutions means.”

“Ignorance is a great source of suffering, and our intention is to alleviate that suffering through all of these programs,” she said. “From our hearts, we are so honored to do this.”

The announcement was part of the Community Solutions Festival, with dozens of tables showcasing the many academic units and student projects in the public service college.

The Watts' gift will fund scholarships and professorships — including one devoted to Native American issues — support student programs and launch a unique initiative to revitalize the community where the Watts grew up, called the “Maryvale Revitalization Project and One Square Mile Initiative.”

“These are two individuals who care deeply about their community, and they decided that the best way to make a difference was through ASU,” Koppell said.

“That’s really powerful because it speaks to the role that we have assigned ourselves — to be an active agent for change by working in partnership with organizations in the community.”

Finding their start in Maryvale

Mike and Cindy Watts have warm memories of Maryvale, a thriving, working-class community where they lived in the 1960s.

They met at a Maryvale High School graduation party and then went for a drive with friends, stopping to jump out of the car and dance along to the radio on Central Avenue.

They’ve been partners ever since.

“If everybody who entered business could have a spouse that would support them like she did for me, there would be a lot more people going into business,” said Mike Watts.

He described those early years, when they couldn’t get a bank loan so they sold the family car and lived off the money while negotiating to take over a shop that rented lawnmowers.

“I had several job offers and we would talk about it — ‘Are you still in the belief we can buy this business and do it?’ And she never once said, ‘I think you should take this job.’ That made me feel supported,” he said.

“It was a good bet on my part,” said Cindy Watts, who was the bookkeeper for the business when they finally were able to buy it. “I was in full support. It was exciting.”

In the 1980s, the Phoenix area began sprawling and their business, dependent on construction, started thriving.

“I knew what it took to build a business and find value in other people,” said Mike Watts, who retired as CEO a year and half ago. “It wasn’t motivation for money. It was motivation for growth. I found that through the proper channeling of people, it would build the business.”

“To me, it’s important to offer the opportunity to every human being to meet their potential,” she said. “We’re all human, we all want the same thing, we want to be happy and be free of suffering. We need one another.”

Over the past several decades, Maryvale has struggled with crime and poverty, and its residents have lower levels of education than other areas of Phoenix and in Maricopa County. Compared with all Maricopa County residents, Maryvale has triple the number of residents without a high school diploma, 39 percent vs. 13 percent for the county.

Koppell said the One Square Mile initiative will concentrate ASU programs in one area and help connect existing initiatives.

“We’ve already discovered lots of cool things going on that are disconnected, so one of the roles we can play is to be a facilitator, a coordinator.”

Carina Ledesma is grateful that the Watts family sees hope in Maryvale, where she grew up.

“Just like there’s some bad, there’s so much good there. There are so many teens who want to go to school.”

Ledesma, who earned a bachelor’s of social work and is now pursuing a master’s of social work at ASU, said she faced low expectations when she was in high school, and that young people there need people like Mike and Cindy Watts to believe in them.

Graduates of public-service colleges become social workers, law-enforcement officers and government workers. So gifts like this are unusual, Koppell said.

“When you think about multimillion-dollar gifts, you think of a business school or a law school, partially because the alumni of a school of social work or a school of public affairs aren’t generally in a position to give those kinds of gifts to their alma mater,” he said.

The Watts’ investment will help fund the college’s hands-on learning programs for students, like the Community Solutions Co-op, a service-learning initiative in which students work to resolve local issues, and the Spirit of Service Scholars, the flagship program that provides in-depth policy and leadership training to students from all majors. Scholars will provide mentorship at Maryvale schools.

It will also help fund the Student Social Entrepreneurship Fund, which offers seed money to students with promising entrepreneurial solutions to social challenges, and the Undergraduate Research Program, where students team up with professors on research that examines societal challenges, gaining valuable research, presentation and publication experience.

One important objective of the gift is to provide experiences to students who otherwise may not be able to afford them. A pool of money will be available to help fund internships, study-abroad trips and undergraduate research.

Koppell said the timing of the gift is significant.

“It couldn’t happen at a more important time in our history, when the belief in public service and the confidence in public institutions is at a low point,” he said.

Mike Watts said that he and Cindy are confident in ASU’s ability to make an impact.

“We’ve seen proof that things can be taken across to the finish line,” he said.

“I have always felt that giving people a reason to be optimistic, to believe in dreams is important,” Mike Watts said about helping the Maryvale community.

“Part of the initiative that we hope to work with the college on is the development of that, a belief system, not just in themselves but in the opportunities that exist in the U.S. and in Maryvale.”

A point of pride for the college is that it is home to ASU’s most diverse student body, with the highest percentages of minority, college transfer, employed students, veterans and first-generation students. The college also boasts the Public Service Academy, the nation’s first leadership program where students receive leadership training and experience to work across the public, private, nonprofit and military sectors.

“Mike and Cindy Watts embody the guiding principles of the College of Public Service and Community Solutions,” said ASU Foundation CEO Gretchen Buhlig. “They are deeply engaged in the community and dedicated to addressing social problems, serving as agents of change for the solutions we want to see in the world. Their transformational investment and leadership will shape the future of public service education.”