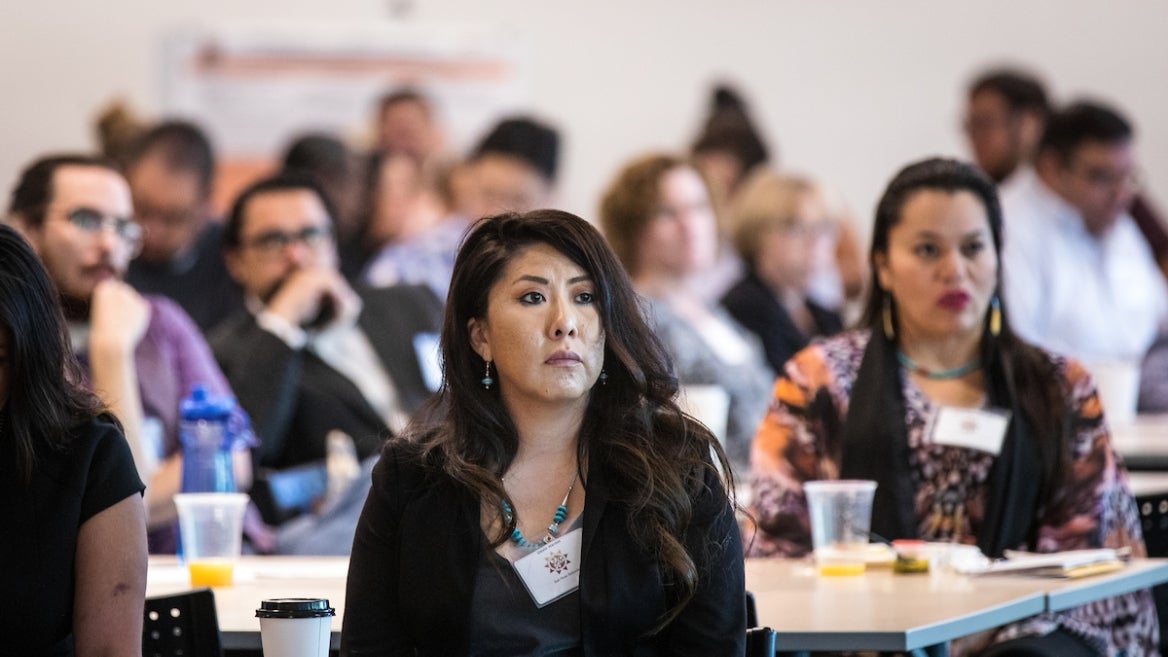 Some of the most innovative and groundbreaking research at Arizona State University is taking place in indigenous communities and on reservations around the Copper State and beyond.

“Tribal nations and communities are becoming more and more interested and embedded in the research process in its entirety, from the research design and implementation to large questions of data use and ownership. More importantly, they are engaged in the institutional review process,” said Bryan McKinley Jones Brayboy, President’s Professor, director of the Center for Indian Education and ASU’s special adviser to the president on American Indian Affairs.

The university has a wide breadth of research and interaction taking place in Indian Country, which was showcased at the “Doing Research in Indigenous Communities” conference held Nov. 4-5 at ASU SkySong.

“Part of our work during this conference is to hear from these tribes and communities and to connect them with universities and researchers with the hopes that some synergies will emerge and so that researchers and institutions better understand the needs and wishes of tribes in the larger arena of research," Brayboy said.

Keynote speaker Malia Villegas, who helped Brayboy with the conception and birthing of the conference several years ago, said it was like watching a child grow quickly.

“I think it’s phenomenal to see how this conference has taken off. ASU has proven they are leaders when it comes to Native American research and is a place that others look to for inspiration,” said Villegas, an enrolled member of the Native Village of Afognak in Alaska who serves as the vice president of community investments at Afognak Native Corporation, overseeing shareholder services. “Looking at this from a tribal industry lens, I’m excited to see business and industry people here, tribal members, students and faculty, all showcasing the great success across Indian Country and inviting people to take a look into the research space.”

There was no shortage of research to offer up, including a first-of-its kind look on technology use on Indian lands. The paper, “Tribal Technology Assessment: The State of Internet Service on Tribal Lands,” was released last month through the American Indian Policy Institute. It showed that many Native Americans do not have equal access to the internet and that most are using smartphones to go online, albeit at much slower speeds.

“This study gives us a clearer picture of what tribal connectivity looks like,” said Brian Howard, a research and policy analyst with the American Indian Policy Institute. “We also looked at things like affordability issues that would prevent tribal residents from accessing internet service.”

The study not only identified the issue but came up with several recommendations. They included a dedicated tribal office in the Federal Communications Commission with a permanent budget allocation, a Tribal Broadband Fund, prioritize funding for tribal lands and encouraging the FCC to engage with tribes and sovereign nations on the issue.

For Lance Sanchez, a 24-year-old member of the Tohono O’odham Nation and a senior at ASU, his focus is more on saving teen lives and getting them more socially and politically engaged.

Sanchez, who is double majoring in American Indian studies, and community advocacy and social policy, said Native Americans have the highest teen suicide rates in the country.

“I am looking for ways to empower youth through leadership building as well as creating different programs that focus on them bettering themselves within the community,” said Sanchez, who is also a member of the National Congress of American Indians Youth Commission and United National Indian Tribal Youth. “The work has paid off because Native Americans are now taking the charge in continuing with higher education. We need more Native teachers, lawyers, nurses, doctors and researchers. This conference helps create those partnerships in tribal communities.”

Denise Bates, assistant professor of leadership and interdisciplinary studies in the College of Integrative Science and Arts, is nation-building through her work by helping other tribes in the Southeast document their histories through community-driven initiatives.

“Many southern tribal communities have not been well documented, particularly during the 20th century,” Bates said. “Colonialism and racial segregation had a huge impact on southern indigenous peoples, and it has only been recently that many tribes from this region have been actively looking for opportunities to engage the public with their histories — and on their own terms.”

Bates has been working with the Coushatta Tribe of Louisiana for the past decade through a variety of mediums, including accessing and digitizing archival material and recording oral histories. Bates has also a written book, “Basket Diplomacy,” (University of Nebraska Press, 2020), documenting how the Coushatta community worked together through multiple generations and leveraged opportunities so that existing and newly acquired knowledge, timing and skill worked in harmony to ensure their survival. The Coushatta is now one of the top private employers in Louisiana through their economic endeavors.

“ASU is an institution that has a lot of resources and helping other tribal nations should not be a regionally focused mission,” Bates said. “It impacts all of us because a lot of best practices often come up as a result of intertribal coalitions and support.”

In addition to nation-building, there was plenty of trust-building, said Bates. Last year ASU brought a Coushatta tribal elder and former chairman, Ernest Sickey, to the Valley to speak to faculty and staff. In return, Bates said, the Coushatta Tribe is encouraging their students to attend ASU.

“They know that ASU is a supportive place, one that not only supports its students but offers the potential to help tribal nations envision a future for their communities,” Bates said.